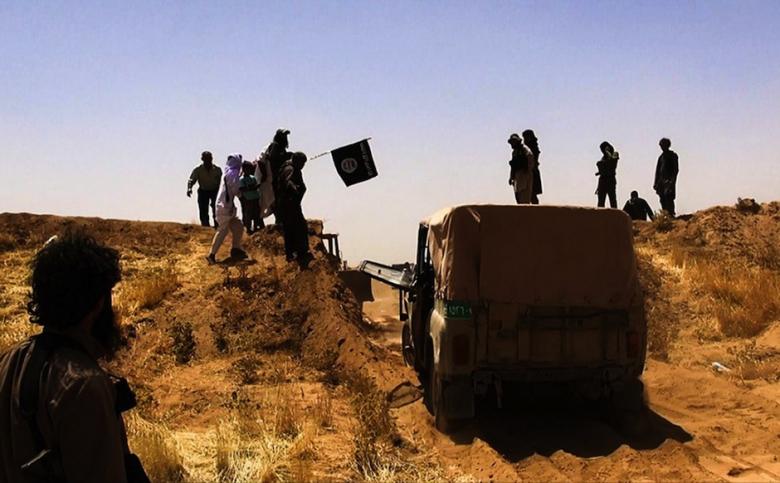 (AL AKHBAR) – The rise of the Islamic State (IS), formerly known as the Islamic State in Iraq and Syria (ISIS), poses a huge challenge to rival al-Nusra Front, the Syrian branch of al-Qaeda. The latter’s jihadi project is now in a precarious position, after large numbers of its followers defected to the ranks of “Caliph” Ibrahim al-Badri aka Abu Bakr al-Baghdadi. Joulani’s followers in Lebanon are no exception, and many of them are reportedly gearing up to travel to al-Raqqa in Syria to pledge allegiance to IS.

Jihadi sources who spoke to Al-Akhbar have confirmed that a group affiliated to al-Nusra Front in Ersal, which includes in its ranks both Lebanese and Syrian nationals, is preparing to go to the IS-controlled Raqqa governorate. The sources explained that there is a deep sense of anxiety among al-Nusra fighters in the Qalamoun region, with the successive victories of IS. This, they say, has prompted the emir of al-Nusra in Qalamoun, Abu Malik al-Shami, to make an audiotaped message threatening Hezbollah in an attempt to rally supporters against the jihadis’ joint enemy and forestall any further defections.

As is known, a large number of Lebanese militants stationed in the Bekaa and North Lebanon had swore allegiance to Abu Malik al-Shami, since al-Nusra Front has yet to name an emir for Lebanon. The number of al-Nusra militants in the border regions and the mountainous areas between Lebanon and Syria is in the vicinity of 600, according to the jihadi sources. The number of defectors so far has not exceeded 50, they claim, but the state of apprehension on account of the decline of al-Nusra’s role and its successive defeats is all too obvious, the sources add.

In the Ain al-Hilweh Palestinian refugee camp, security sources say a small group of 20 men have recently pledged allegiance to IS’ “caliphate state” and “Caliph” Baghdadi. The sources say that Mohammed A., aka Abu Aisha, is the leader of this group. This means that ISIS, or IS, now has an official presence in Lebanon.

The security sources believe this will be the first IS cell to be officially active in the country. Recall that the group had claimed responsibility for one of the suicide bombings that targeted Haret Hreik in January, which was carried out by Qutaiba al-Satem.

The apprehension in al-Nusra Front’s ranks has been translated to a drain in its jihadis, who have flocked to the “caliphate state,” as the latter stole the spotlight in Syria and Iraq, amid question marks regarding the absence of the emir of al-Nusra Abu Mohammed al-Joulani in these difficult circumstances. To be sure, the rise of ISIS has dealt a blow to al-Nusra’s level of support, which, according to leaders in the latter group, “requires urgent action,” especially since “the declaration of the caliphate has aggravated existing disputes.”

Since the emergence of ISIS on the Syrian jihadi scene, al-Nusra Front, whose leader Joulani is loyal to al-Qaeda and Ayman al-Zawahiri, has been in decline. Soon afterwards, Joulani implicated his group in a doomed war with its ideological twin, which is more ferocious, brutal, and experienced, and better equipped and numerically superior.

The dispute had come to the surface back in April 2013. For the emir of ISIS previously and current “caliph of the Muslims” Abu Bakr al-Baghdadi, this date marks the “rebellion and treason” of Abu Mohammed al-Joulani “who must pay a heavy price.”

And indeed, Joulani started to pay the price. First, ISIS cut off funding from al-Nusra, and blocked military supplies to its rival jihadi group, initiating a “cold war.” Baghdadi, without using force at first, began to seize strategic positions held by al-Nusra.

In parallel, ISIS fought a war of religious ideas against Joulani, “the rogue who betrayed his duty,” while ISIS’ ideologues portrayed the emir of al-Nusra as an apostate for having disobeyed his emir. At the same time, hundreds of al-Nusra fighters joined ISIS, impressed by its more formidable organization.

Al-Nusra found itself in financial difficulty. Although it is the officially recognized branch of al-Qaeda in Syria, the group found itself isolated and under siege. To make matters worse, the “cold war” turned into a war of assassinations and bombings between the adherents of the same ideology. That phase saw the largest number of defections to ISIS from al-Nusra, including by senior leaders such as the Saudi Abu Dhar al-Jazrawi.

Afterwards, the battle intensified between the two al-Qaeda offshoots, claiming hundreds of lives on both sides. People were beheaded, and others were even crucified, while most defections took place in the ranks of al-Nusra. Events then accelerated, with ISIS fighters making huge strides in Syria and Iraq, until the group declared an Islamic caliphate and Baghdadi as the new caliph.

Baghdadi declared that it is a duty of every Muslim to swear allegiance to him, which sparked a new wave of defections in other jihadi groups. Although al-Nusra Front members usually see ISIS as ultra-extremists and heretical, some of them have chosen to join the “caliphate state.”

It is worth noting that in addition to controlling vast swaths of land, IS also has access to a lot of money, a necessary condition for the continuation of any war effort. In truth, the group is among the wealthiest terrorist organizations in the world. If it manages to seize the Bayji oil refinery in Iraq, it would become the first oil-exporting non-state actor in the world, though it is already selling crude oil on the black market.