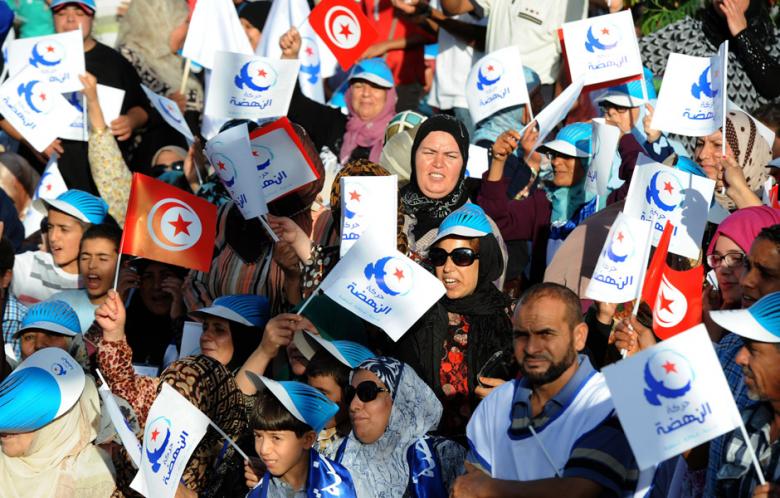 Less than a week before the elections, Tunisian state agencies are preoccupied with possible terrorist threats despite officials boasting of accomplishments in the war against Ansar al-Sharia and its 2-year-old armed wing, the Uqba bin Nafe Battalion. The group Ansar al-Sharia is headed by Seifallah bin Hassine, also known as Abu Ayad al-Tunisi, and has been listed as a terrorist organization since 2013.

Tunis – The Tunisian government does not deny its fear of a terrorist attack targeting the elections in Tunisia. The fact that the country is only a few days away from parliamentary elections scheduled for Sunday October 26 might prompt the Uqba bin Nafe Battalion to execute its threats by targeting security personnel and citizens as it promised earlier this month in a recording posted online.

In an interview with Al-Akhbar, the Interior Ministry spokesperson, Mohammed Ali Laroui, expressed fear that security incidents might disturb the electoral process. Laroui stressed that “security agencies have warned that terrorist operations might target the electoral process.” He said the warning is “based on security and intelligence information and a reading of the general landscape whereby Tunisia’s regional surroundings are plagued by terrorist operations,” in reference to the developments in Libya.

Laroui revealed that security agencies foiled a terrorist plan to use car bombs against a number of targets after dismantling a terrorist cell made up of seven individuals affiliated with Ansar al-Sharia in Tunisia and its armed wing fortified in Mount Chaambi in the Kasserine province (290 kilometers or 180 miles west of the capital). The cell was planning attacks and assassinations targeting political and security figures but Laroui did not provide the names of these figures.

However, a high-ranking government official who asked to remain anonymous told Al-Akhbar that investigations with the members of the takfiri group who were arrested in the past three weeks revealed that “the Uqba bin Nafe Battalion had planned to assassinate Prime Minister Mehdi Jomaa, Interior Minister Lutfi bin Jedou and Laroui” before the next parliamentary and presidential elections.

The government source pointed out that the terrorist groups’ targets are not restricted to these figures but includes some vital targets. He indicated that security agencies have placed the most prominent party leaders under tight security protection, monitoring their movements during the electoral campaign to prevent their targeting as part of a plan that also includes securing about 10,000 polling stations.

Informed security sources told Al-Akhbar that “terrorist groups were planning to target the French ambassador in Tunisia, Francois Gouyette, by targeting his motorcade with a car bomb as it leaves his residence in al-Mursi suburb. This was confirmed by a statement from an embassy source,” which stated that “the Interior Ministry contacted them to inform them of a plan to target the ambassador and ask them to be on high security alert.”

These developments heightened fears that car bombs might be the leading weapon in the next phase of confrontations between military and security agencies on one hand and terrorist groups on the other. Agencies are growing more concerned every day, especially over individual assassinations and bombings of electoral campaign sites or popular meeting sites. This prompted the crisis cell to issue a booklet entitled “Security Guide for the Candidate” that includes security instructions and recommendations aimed at reducing potential risks.

These threats prompted security and military agencies to raise the level of alert and track smuggled weapons according to security sources who pointed out that the new recommendations call for monitoring Mount Chaambi’s surroundings to stop infiltration operations back and forth through rugged areas and valleys and cut off supply operations.

Efforts by the Tunisian government to secure the elections require it to encircle the terrorist groups fortified in Mount Chaambi and impose a tight siege on them to limit their movement. According to Laroui, the measures they adopted have largely succeeded, which prompted the Uqba bin Nafe Battalion to disseminate a recorded message by its leaders for the first time since its inception after the losses it sustained within its ranks that included capturing more than 50 members and seizing weapons and money.

What terrorist groups are counting on

The plan devised by terrorist groups to disrupt the electoral process relies not only on their strengths but on the weakness of their adversaries as well, which in this case is the Tunisian government. Terrorist groups believe that the government’s greatest weakness lies in its political elite. As soon as signs of a security crisis emerge, these elites will take it upon themselves to achieve half of the mission by targeting and confounding state agencies especially that Article 74 of the Tunisian constitution stipulates postponing the presidential elections and repeating all its procedures from nominations to setting a new date if one of the candidates dies or withdraws in the first round which begins next Saturday.

What terrorist groups are trying to do in Tunisia today is bring about a new phase that consecrates chaos in the country, either by altering the balance of political forces and their internal rules or the regional equations relevant to the area. The best tactical entryway they could use is ruining the elections to guarantee that the country would fall into their hands, paving the way for implementing the rest of their plan.

This plan was explicitly expressed in the confessions of detainees from terrorist groups associated with Ansar al-Sharia, a group loyal to al-Qaeda in the Islamic Maghreb which devised a plan to create instability starting with the elections. The group sought to do so for reasons other than ruling elections a form of disbelief and those who participate in any form of the democratic process to be disbelievers since “democracy is a religion of disbelief” as far as the group is concerned. This is derived from the reading provided by theorists of jihadi/terrorist groups of the situation in the countries that witnessed revolutions, including Tunisia, which is often mentioned in the context of discussing the “impossibility of coexistence between secularists and Islamists.”

Terrorist groups are planning to prevent the holding of parliamentary elections in Tunisia in order to create chaos. They are operating under the assumption that delaying or cancelling the elections will prompt in-fighting among the political forces, which will try to win the loyalty of security and military agencies. These agencies, the terrorist groups believe, will split into two sides if the country’s security and political stability are shaken.