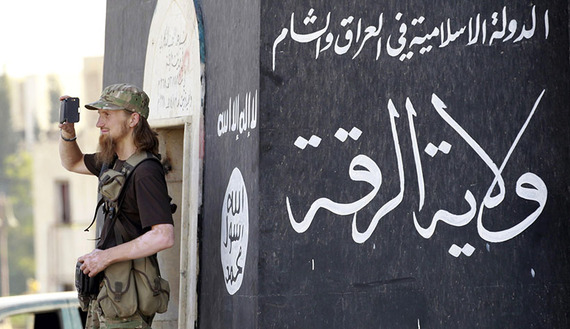 (Al Monitor) – The Clinton-IS story started when several Arab-language websites posted a report claiming that Clinton wrote in her memoir “Hard Choices” that the United States assisted the formation of the Islamic State of Iraq and al-Sham (ISIS) to cause division in the Arab world, and that Washington and its European allies agreed ISIS would be established on July 5, 2013. According to this fabricated story, however, this plan collapsed due to the June 30 Revolution in Egypt that targeted the Muslim Brotherhood and ousted former President Mohammed Morsi.

The story was broadcast on many Arab TV channels, including several major news networks. It was rather obvious that this story was untrue and entirely fabricated, which I was able to quickly verify by purchasing a digital copy of “Hard Choices” and simply searching for anything related to the news that was circulating. Nothing of what was said in the media was in the book; it was merely propaganda that exaggerated the threat IS poses to the region and the world.

For weeks now, many baseless stories have appeared online and have been published in newspapers about the brutality of IS: the forced circumcision of females; the claim that IS had made some modifications to Quranic verses; and the suggestion that IS had threatened to destroy Mecca, the holiest Muslim site. One popular picture that was shared by thousands of social media activists was that of an IS member embracing a 6-year-old girl, claiming that he had married her. Thanks to Google’s image search it became clear that the story was not true and that the man and the girl in the picture appeared in an entirely different context. The girl had been taking part in a Quran recitation competition in Raqqa, northeast Syria. The man, the competition’s presenter, had held the girl and tried to encourage her when she had made a mistake in reading one of the verses of the Quran.

A story suggesting that IS leader Abu Bakr al-Baghdadi had met US Sen. John McCain also made the headlines. Lebanese journalist Habib Battah shared the picture on his Facebook page on Aug. 12, but he then wrote an article citing a comment by one of the men who appeared in the picture with McCain, Mouaz Moustafa.

Moustafa, a 29-year-old Washington-based Palestinian, had facilitated McCain’s visit to northern Syria to meet members of the Liwa al-Tawhid Brigades in the city of Azaz. He heads a group named United for a Free Syria, and he is the executive director of the Syrian Emergency Task Force. In response to Battah’s Facebook post, Moustafa said, “It’s so upsetting to keep seeing this photo among other photos calling me and the guys in the picture ISIS, [because] ISIS killed some of those in the picture; I wear a [kaffiyeh] because I’m Palestinian and take it with me everywhere; ISIS killed two of my staff … because they work with me and my organization. They were both Sunni Arabs [and] one spoke [five] languages, ISIS [killed] them as they consider me [an] apostate; those in the picture are Free Syria Army [fighters] from a battalion called [N]orthern [S]torm … ; and please be informed before sharing complete BS [that] I usually don’t reply because it’s not worth my time … I just wanted to let you all know that these are complete fabrications. Thanks guys for listening.”

With this piece, I do not intend to defend IS or attempt to crystallize its image. The group is expressing itself without any fear through its websites and social media accounts by showing beheadings as they happen and openly acknowledging their stances and activities. In fact, the Islamic State’s media strategy, through its online social media posts and publications, highlights the group’s intention to scare all its enemies, a strategy that aims at defeating the opponent without shooting a bullet, for no one wants to be slaughtered with a sword or knife while hearing the cheers of dozens or hundreds of extremists.

The Islamic State’s strategy has already succeeded in Iraq and several parts of Syria, and the fabrication of horror stories about its activities win IS further ground. Its online and print media organization is efficient. Each online network such as Twitter, Facebook and YouTube have designated moderators, and each “wilayah” (state) has its own dedicated social media accounts, with Ninevah state, for instance, only posting news from that area. In addition to the official IS social media accounts, there are hundreds of private accounts of individuals who are followed by thousands of Internet users. Both help spread the organization’s propaganda message — those aimed at its enemies or those meant to attract supporters and recruits. All of the Islamic State’s productions fall under the main umbrella of “Al-Furqan Media,” which regularly posts videos and audio recordings and produces a documentary-style series under the title “Messages from the Land of Epic Battles.” Interestingly, another media organization associated with IS, “Fursan Al-Balagh Media,” works on video transcriptions, giving viewers the chance to both read and watch all productions.

On Aug. 9, a photo showing an image of the IS flag displayed on a smartphone in front of the White House was tweeted from pro-IS Twitter handle @sunna_rev. The image reflected a trend by followers and supporters of the self-styled state to say they are everywhere, even at the White House. The tweet came under the hashtag #AmessagefromISIStoUS that attracted dozens of tweets by pro- and anti-IS Twitter users. On Aug. 18, a YouTube video titled “A message to the American People” was posted by Al-Miqdam Productions showing pictures of coffins covered with the US flag with a caption reading, “This is what will happen to you in any place you are, if aircraft bomb the mujahedeen.” (YouTube quickly removed the video, saying it violated the website’s policy against violence.)

Previously, on July 4, Baghdadi’s first appearance came via social media. The first pictures were posted on Twitter shortly before the full speech was uploaded on YouTube, emerging as a global event that made the headlines on most major international news networks. This proved once again the advanced level of social media planning and execution IS engages in, in addition to its enormous dependence on it to convey messages, launch propaganda campaigns and communicate with the world. This might be seen as a strength on the one hand, while on the other hand it shows a serious vulnerability: If tackled efficiently through a global strategy that involves social media networks, IS may be muted and limited in its scope — a first step in a long journey ahead.