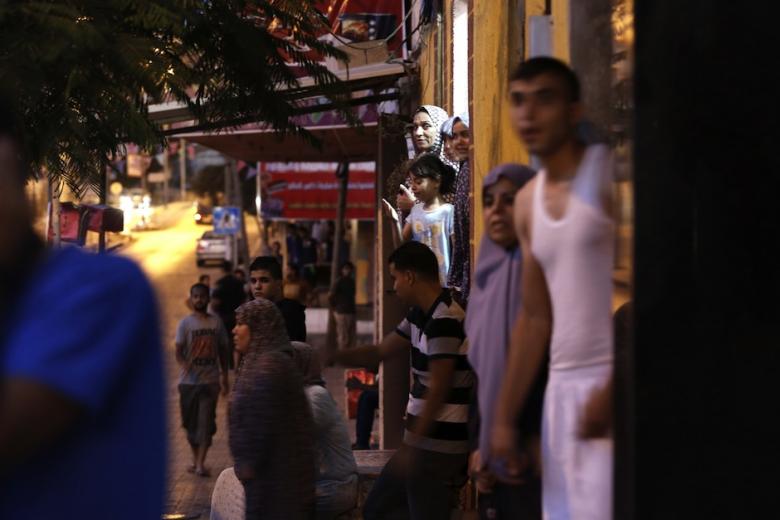 (Taghrid Atallah. Gaza) – Nothing. Despite their stiffness, my fingers run quickly on the keyboard, searching for any news related to the truce, talks, consultations, whispers, a sign here, an indication there, but there is nothing. All Mr. Google shows when you search under the word Gaza is more international solidarity rallies. Each day, more signs carry the word Gaza and slogans ring high as the world exercises its favorite pastime – the ability to gaze for the longest time possible at the massacres committed here without any serious reaction, other than the act of staring itself.

Writing, inadvertently, eases my stress, especially after another night of “heated battles.” Perhaps this isn’t an eloquent description, but I will not look for another expression for the sake of eloquence. Maybe it is revulsion from the inadequacies of language or weariness with what is being written to express regret, condemnation and protest, ad infinitum.

The night has finally passed. Death was our guest here, waiting to leave with the departure of the last enemy plane. Every break the Israeli pilot decided to take, to eat a sandwich or go the toilet or perhaps reassure his loved ones that he is fine, allowed a Palestinian to live.

I wonder to myself, how can I joke in circumstances like these where blood mixes with the smell of concrete, gunpowder dust, torn clothes and eyes open for the last time? Death itself does not put an end to the concern of bombs that did not spare even the cemeteries in the 2008 war.

Just to talk about the fear and terror I feel all the time is not possible. Perhaps it is shame before the martyrs who are falling one after the other. It is no longer feasible to wear your feelings on your sleeves, even to write the stories of war, as a journalist friend recommended on her Facebook page.

Between documenting what is happening on the ground and opening the international market for blogging with the start of the third season of Gazan blood, we are closer to madness than to taking on the heavy burden of transmitting the scenes of the massacre to the world.

It is to stare at the sky of a new day and fill my eyes with its blueness that I am unwilling to watch more pictures of the massacres, not because they are harmful, as some have suggested, advising us to choose pictures with a softer impact on viewers, out of concern for the humanity of their feelings.

Indeed, by the third day of the war, activists had begun posting on social networking sites pictures bursting with life amidst the death and the destruction. Children taking a bath on the ruins of the their demolished homes, a mother ululating as she bids farewell to her child, martyrs smiling for their last pictures, commemorative photos with missile bombs by photographers documenting the event, and so on.

Don’t think, however, that the war stops my mother from thinking of the main breakfast dish in the early morning and getting into huge arguments, as if today’s cooking is her only way to let off steam. Although she has been in that habit for many years, these days, she is even more likely to argue over the choice of meals, perhaps to distract my siblings from what is going on day in and day out.

I even find myself believing every word she says, which is unlike me. After all, she was unarguably the first one to hear the radio, continuously attached to her ear, announce news of a truce agreement in 2008. Perhaps she will do so again this time.