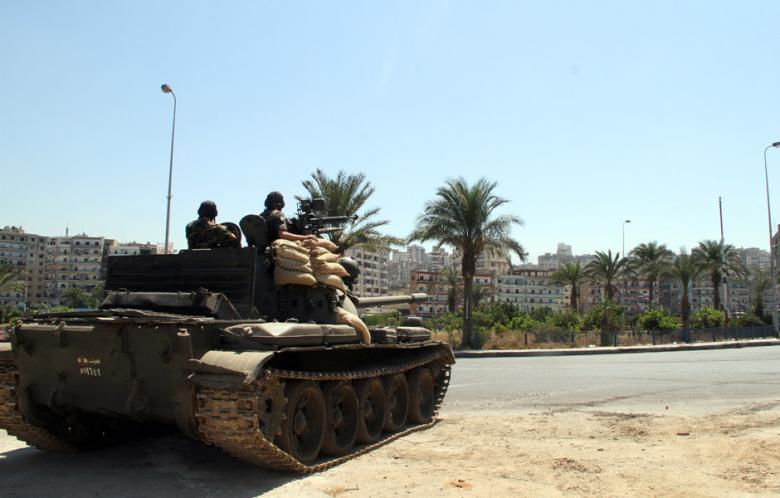 Since the recent clashes in Ersal, terrorist attacks targeting the Lebanese army in the northern city of Tripoli are no longer restricted to some hand grenades thrown at night near military barracks or to locally-produced IEDs targeting army patrols.

It was 4:00 am on Tuesday, September 23 when a group of terrorists opened fire at an army checkpoint in al-Akouma region in al-Badawi near Tripoli’s northern entrance, killing one soldier, Mohammed Khaled Hussein from the town of Tikrit in Akkar, and injuring two others.

According to preliminary information, the unknown assailants were driving an unidentified vehicle as they shot at the soldiers who were unable to retaliate.

This attack was the first of its kind since a security plan was implemented in the city last April, suggesting that the terrorist groups are now planning to exercise more pressure on the army in order to distract it on more than one front, alongside the campaign led by Future Movement MPs and extremist salafi clerics inciting people against the army.

“The unrest in Tripoli and frequent attacks against the army in the city and other regions are first and foremost the result of a campaign inciting people against the army” security sources told Al-Akhbar.

Interestingly, Tuesday’s attack took place only 24 hours after MP Khaled al-Daher and the Committee of Muslim Scholars adopted two provocative positions. This followed cheers supporting the Islamic State in Iraq and Syria (ISIS) during Friday prayers at al-Takwa mosque in the city on September 19.

Daher launched a vicious campaign against the army and Commander Jean Kahwaji, threatening “a Sunni revolution” and promoting mutiny among Sunni soldiers by calling them “to return to their homes and their barracks.”

Meanwhile, the Committee of Muslim Scholars warned that video footage showing the army “harassing Syrian refugees in Ersal” calls “to sound the alarm bell,” claiming that “it crosses all red lines.”

Sources close to the March 8 coalition in the city asked, “Didn’t the attack against the Lebanese army cross the red line? Doesn’t the extremist campaign and blind terrorism led by some parties in the name of religion and sect call for a Sunni revolution, since it is only the people of this sect who are being victimized by it?”

The sources expressed astonishment because Daher and other Future Movement MPs in Tripoli and the North, along with the Committee of Muslim Scholars, did not denounce Tuesday’s attack against the army in Badawi, while “they mobilize to defend any Lebanese or Syrian suspect who gets arrested.”

“Will Daher and the Committee’s sheikhs head to Tikrit to offer their condolences to the family of soldier Hussein? And if they go, what will they say to the family who will accuse them of standing behind the death of their son due to their incitement, along with others, against the army?” the sources asked.

The sources indicated that “the incitement campaign is continuing with increased momentum. It only took a different shape with different slogans but in substance, it is still the same.”

“Even the parties leading this campaign that seek to spread extremism and incitement are still the same and they are present on every occasion,” the sources stressed.

Terrorists from al-Nusra Front, hiding in the barren territory surrounding Ersal, gave Rana al-Fliti, wife of kidnapped Interior Security Forces Corporal Ali al-Bazal, a list of their demands after they met with her, in an attempt to exercise more pressure on the army and the government.

At a press conference, Fliti announced that the list of demands include opening “a humanitarian corridor to Ersal.” She also said that she decided in coordination with the families of the other kidnapped servicemen “to take actions and escalate to a level that will surprise the government and the people.”

Fliti called on Hezbollah Secretary General Sayyed Hassan Nasrallah to “stop the bloodshed and open the way for negotiations because we are running out of time and within 48 hours, the soldiers will be killed one after the other.”

This article is an edited translation from the Arabic Edition