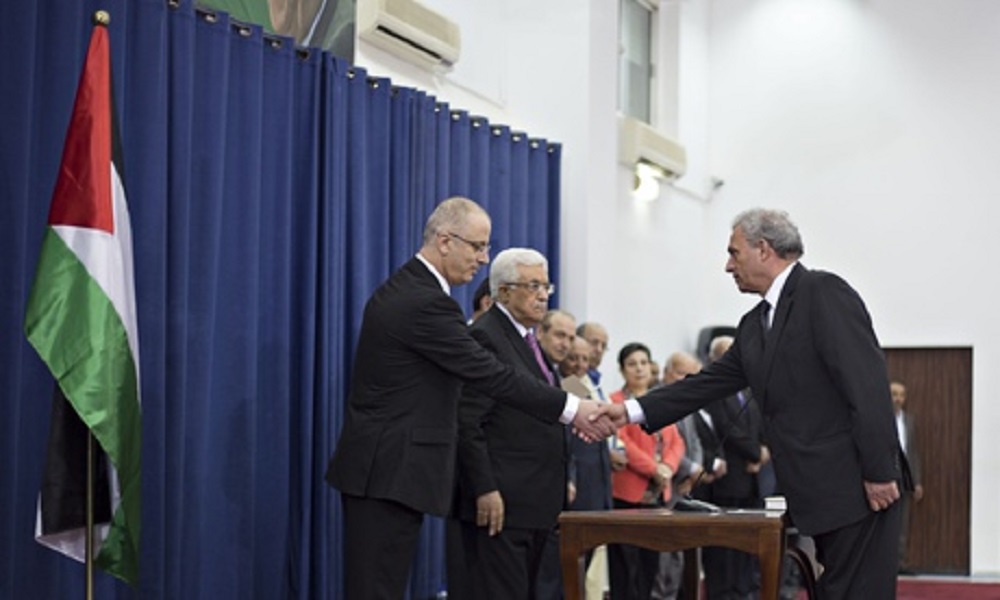 (THE GUARDIAN) – After seven years of a bitter and at times lethal rivalry between the two main Palestinian factions, Fatah and Hamas, a historic Palestinian unity government has been sworn in, ending years of division.

The signing ceremony, which seems likely to complicate relations with the Palestinian Authority’s international aid donors in Europe and the US and increase tensions with Israel, was broadcast live in both Gaza and the West Bank.

The US indicated over the weekend that it would wait to see the policies of the new unity government before deciding whether to recognise it, because of Hamas’s involvement.

Before the ceremony the US secretary of state, John Kerry, telephoned the Palestinian president, Mahmoud Abbas, to express “concern about Hamas’s role in any such government,” the state department spokeswoman, Jen Psaki, told reporters.

Israel, which suspended peace negotiations in April when a surprise reconciliation deal was signed, opening the way to the appointment of the new government, has threatened punitive sanctions against any government backed by Hamas, saying it would serve as a front for the group and “strengthen terrorism”.

Abbas, who heads the mainstream Fatah movement, has said the 17-member cabinet would comprise unaffiliated ministers and would strive to pursue peace, despite Hamas’s refusal to accept co-existence with Israel.

“Today, and after announcing the government of national unity, we declare the end of division that caused catastrophic harm to our cause,” Abbas said.

The announcement of the new government, ending a long and debilitating political and territorial division in Palestinian affairs, opens the way for long-delayed Palestinian elections, slated for 2015.

The ceremony took place just hours after Israeli jets struck the site of what they said were two rocket launches from Gaza.

The new government will reunite Gaza and the West Bank under a single political authority for the first time since 2007, when Hamas – which won Palestinian legislative elections in 2006 – asserted control over the Gaza Strip, forcing out Fatah.

Since then the West Bank has been governed by Abbas and Fatah and Gaza by Hamas, which is regarded as a terrorist group in many capitals.

The swearing-in ceremony in the West Bank city of Ramallah came as the Israeli prime minister, Binyamin Netanyahu, appealed to the international community not to rush into recognising the new government, largely made up of technocrats.

Again on Monday, Netanyahu hit out at European governments for condemning a shooting attack on the Jewish museum in Brussels but responding with “ambiguity” to reconciliation between Fatah and Hamas.

“It is puzzling to me that governments in Europe that strongly criticise this act of murder speak with ambiguity and even friendliness about a unity government with Hamas, a terror organisation that carries out crimes like these,” he said.

In a sign of the potential difficulties ahead, Israel refused three Gaza-based ministers permission to travel to the West Bank for the swearing-in.

The ceremony took place after several last-minute wrangles that threatened to delay the signing, including over who would be foreign minister and an attempt by Abbas to abolish the post of prisoners’ minister, which was opposed by Hamas.

That dispute was resolved after it was agreed that the prisoners would remain within the government portfolio and would be held by prime minister Rami Hamdallah.

According to a draft obtained by AFP, the new government will have 17 ministers, five of them from Gaza, and will be headed by Hamdallah, the current prime minister in the West Bank, who will also hold the interior portfolio.

Abbas has already pledged that the new administration will abide by the principles laid down by the Middle East peace quartet in that it will recognise Israel, reject violence and abide by all existing agreements.

Briefing reporters a few hours before the signing ceremony, Israel’s intelligence minister, Yuval Steinlitz, a close ally of Netanyahu, insisted that the deal reasserting the Palestinian Authority’s governance over Gaza placed an obligation on Abbas to demilitarise the coastal strip as part of the Oslo peace agreement.

Israel claims that factions in Gaza have up to 12,000 missiles and rockets under their control. “Enough of these tricks,” Netanyahu said. “If this new Palestinian government has regained sovereignty over Gaza the first thing that Abbas should do is announce he is starting demilitarisation of Gaza.”