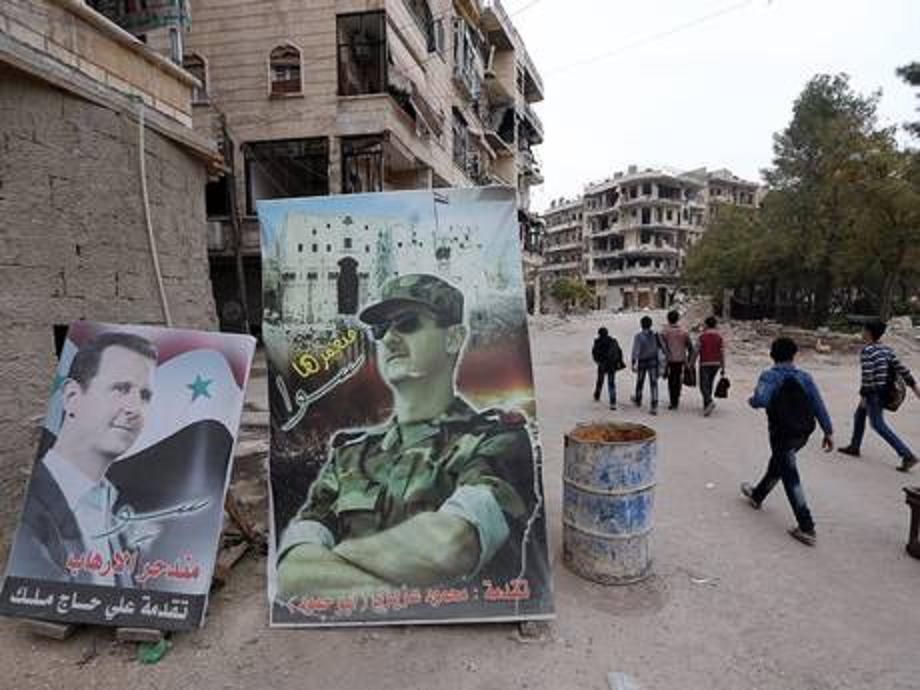 (Robert Fisk – The Independent) – How has Bashar Hafez al-Assad survived these past four years? Ever since the Syrian revolution of 2011, his overthrow has been predicted by the greatest statesmen of our day, by the finest journalists, by the most anonymous of “senior diplomats”. What is the man’s secret?

It’s difficult to remember how swiftly he became the West’s latest Arab Hitler, his repressive government a regime of war crimes, his beautiful wife transformed overnight by the world’s press from the “Rose of the Desert” to Lady Macbeth of Damascus. Laurent Fabius, France’s least eloquent foreign minister, even told us that Bashar does not deserve to live “on this planet”. But Bashar has survived in another universe. It’s called the Baath party, and its satellite is the army.

The government’s Syrian Arab Army is a machine which in four years has lost 46,000 of its soldiers to a revolution that was supposed to have replaced the Assad dictatorship with one of those democratic, secular, pro-Western, human-rights-obsessed states of which we all dream but which, alas, does not exist in the Middle East. Instead, Syria’s heroic freedom fighters – extolled by a media which had already feted the romantic liberators of Libya – transmogrified into a black-cowled Salafist cult which chopped up their own Muslim people, decapitated Western hostages and burned men alive, roasting Syrian corpses on spits long before it broadcast the immolation of a captured Jordanian pilot.

But first, the Baath party. Officially, it’s the child of the Syrian-Iraqi Baath (“Renaissance”) movement whose Christian-Sunni Alawite founders intended to create a secular, socialist, revolutionary organisation which would both guarantee the rights of a post-colonial Arab population and secure regimes which would be united in opposing “Zionism” and the West while maintaining close relations with the Soviet Union. It proved as much a fantasy – and as infantile – as the West’s own aspirations for the region. In reality, the party became a massive security apparatus whose raison d’être – in both Syria and Iraq – was the preservation of the regime. Inevitably, the party split and the pseudo-socialist autocracies of Iraq and Syria sought to destroy each other. But while Saddam’s Baath party was eventually crushed by the United States – no Arab country could ever have achieved this – Hafez al-Assad and, after his death in 2000, his son Bashar remained in total control of a movement which combined nepotism, socialism, corruption, brutality and courage in about equal measure.

The very military-political matrix of the party in Syria, which controlled at least four levels of intelligence officials, ensured that internal opposition to the regime – even from within the Assad family – was impossible. While Assad father-and-son remained steadfast (one of their favourite words) in demanding land for peace with Israel – a policy which could only display the hopeless nature of Yasser Arafat’s peace-before-land negotiations – Syria’s moral integrity could survive. But once the Arab Awakening moved like an earthquake across the Middle East, political opposition to the Assad family manifested itself in hundreds of protest demonstrations.

Whether the ruthlessness of the government’s suppression led to the civil war – or whether, as Bashar’s supporters claimed, foreign and Islamist groups were armed and killing Baathists – has still to be fully investigated. Certainly, Syrians fought back with weapons once violence was used against them. But Jabhat al-Nusra and other Islamist groups emerged from the slums of Damascus and Aleppo and Raqqa long before foreign fighters arrived in Syria from Iraq. Even in 2011, NGOs were reporting that armed Islamists could be found in the suburbs of Homs.

But the West sought to promote an alternative government, refused to countenance the continuation of Assad’s rule and even urged the opposition to cut any remaining relations with the regime. Weapons poured across the border for the large number of Syrian military deserters in the so-called “Free Syrian Army”, which formed yet another of those supposedly pro-Western guerrilla armies that have littered the Arab world in modern history only to be defeated, suppressed or betrayed at a later date.

The Baath party fought back with its own militias, and the Syrian army, corrupted by 29 years of occupation in Lebanon, was turned into a formidable fighting force not just by the government but by an officer corps of largely Sunni Muslim officers loyal to – but not part of – the largely Alawite (Shia) Assad regime. And it is the Syrian army – ruthless, increasingly better-trained and now allowed almost unheard-of freedom in its tactics and command decisions – which now allows Assad to rule. Repeatedly, Bashar al-Assad has praised his army, honoured its “martyrs”, even appeared on stage before hundreds of photographs of his dead soldiers, well aware that if the Baath party is the foundation of his regime, the army is its only viable defence.  Its soldiers have acquired that frightful quality which every rebel must have: they like fighting – and, therefore, they want to win.

And Russia helped. Vladimir Putin loathes Islamists as much as the Americans and Europeans – some of his remarks suggest an almost racial hatred of Muslims – but he admires anyone who stands and fights. While the elected dictator of Ukraine fled for his life during the Kiev revolution, it was not lost on Putin that Assad stood his ground in Damascus and kept his head when all around him were losing theirs. The Russians know the strength of the Syrian army – just as they appreciate the gravity of its huge casualty lists – for many of the officer corps were trained at Soviet academies in Moscow; and, ironically, in Simferopol.

Civil wars engender crimes against humanity. Blood sticks to everyone’s hands. War crimes adhere to government and anti-government forces, however much we would like to tell the good guys from the bad guys. There was a time, just three years ago, when European newspapers carried stories of Syrian anti-Assad fighters marrying female comrades, of opposition snipers marrying the nurses who healed their wounds, while government snipers killed children. The stories were both true and false. Syrian soldiers also married into military families and opposition bombers slaughtered schoolchildren.

The West still maintains that Assad’s forces use chemical weapons – even after the Organisation for the Prohibition of Chemical Weapons (OPCW) confirmed that all Assad’s declared chemicals had been destroyed, with the help of the Americans. But the deal to emasculate Syria’s strategic deterrent – its chemical capacity – was struck to allow Washington and London off the hook. Their threat to bomb Assad out of Damascus was hollow – and Assad’s self-confidence blossomed. Those who hero-worshipped the original Syrian opponents of Assad (brave men indeed) are now creating a new and dark scenario for us, in which Assad has all along encouraged the Islamists – indeed allied himself to Isis – via a series of secret but mythical negotiators, and in which Assad’s army fights only its internal opponents and lets Nato bomb Isis to its heart’s content. But Assad’s army is fighting Isis – south of Qamishleh, for example, and north-east of Latakia – and its soldiers have been shot into mass graves by the black-hooded men of the “Islamic Caliphate”.

So who will win? At first, we supported the opposition and hated Assad. But now that Isis is ruling much of Syria (though few of its cities) and killing Christians and Westerners, we hate Isis even more than we hate Assad. That’s why we bomb Isis but didn’t bomb Assad. And as long as both “sides” think they can still win, the war will go on for another year or two. Or three. Which means that Assad survives. But after perhaps 300,000 dead, would that be a victory?