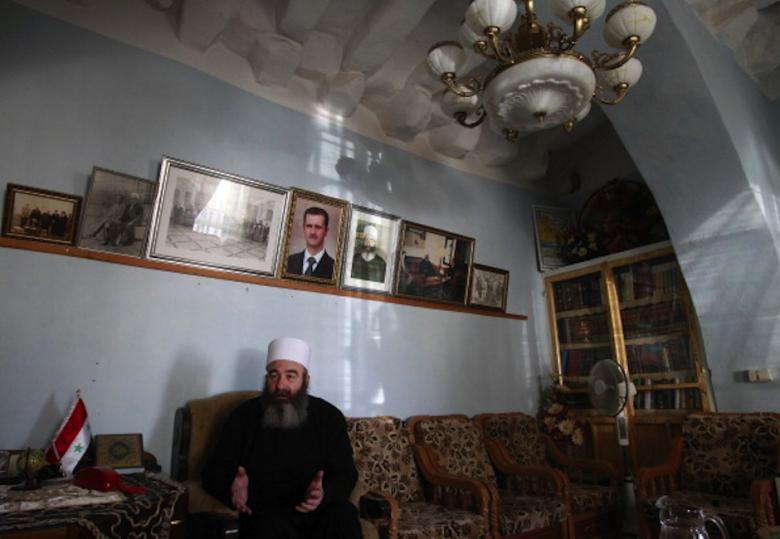 (ALAKHABAR) – The Druze community is observing the new developments in the region with great unease. The declaration of an Islamic caliphate is enough of a reason for minorities to worry about their future. And as Israeli projects are promoted by Druze collaborators to achieve “the illusion of a Druze statelet,” the Druze in Syria and Lebanon are committed to their nations and national armies, stressing that “We are not border guards for Israel, but we are in the heart of the Resistance.”

In a post Sykes-Picot world, it is certainly frightening for a small and scattered minority to find a place on the new map. The Druze, particularly in Lebanon and Syria, share existential fears with all other minorities in the Levant, and perhaps they even have more reasons to be worried.

The situation was exacerbated as the attempts to divide the region actually led to the establishment of a Kurdish statelet in northern Iraq and in parts of northern Syria, while a caliphate is expanding in the heart of the Syrian and Iraqi desert.

In this Islamic State, however, the Druze are considered “straying kafirs (infidels) whose food is not allowed to be eaten and their women may be taken in captivity. Their money should be taken because they are apostates and their repentance may not be accepted, but they should be killed wherever they are,” according to a fatwa issued centuries ago by Muslim scholar, Sheikh al-Islam Ibn Taymiyyah, (The permanent committee of scholarly research and ifta in Saudi Arabia “Scholars’ Opinions About the Druze,” “Views About the Druze and the Christians” Ibn Taymiyaah- volume 28).

The Druze are aware of the drastic changes that have been taking place in the Levant. For them, the subject of partitioning the region, that up until recently was just something they have occasionally heard about, like everyone else, has today become a reality in Kurdistan and in large swathes of land in Syria and Iraq. Today, new entities are being created alongside the Jewish state.

Will the Syrian state prevail and continue to be the protector of the Druze? Will the Druze be able to form their own canton in the event of the collapse of the state? What about Lebanon? Is there any chance to change an already fragile system emanating from the Taif Accords?

Such questions ought to open a serious debate about the future of minorities that have always formed geographic and demographic linkages among post Sykes- Picot entities.

Until this day, Druze commander Sultan Basha al-Atrash (who led the Syrian revolution against the French mandate), still holds a special place in the hearts of all the Druze. Atrash, the late Sweida chief, is renowned for refusing a French proposal in the 1920s that gave autonomy to the Mountain of the Druze and named it “Mountain of the Druze Governorship.”

The Druze also have other prominent heroes, including Kamal Abu Lteif, an officer in the Syrian army, originating from the town of Iha in Rachaya, and Kamal Kinj Abu Saleh, a lawyer from Majdal Shams in occupied Golan, both credited with uncovering an Israeli scheme in the aftermath of the 1967 war.

In his book “The Story Of The Druze State,” author Khaled Katme reports that the two Kamals aborted in mid-1968 an Israeli scheme to invade the south of Syria all the way to Sweida and the south of Lebanon all the way to Rachaya to establish a “Druze State” that would protect Israel’s northern borders.
The story was also cited by Israeli historian Shimon Aviv in his book “Copper Plate” and mentioned in the memoirs of General Sami al-Khatib.

About half a century after the idea of a “Druze statelet” was first proposed, information recently received by security officials monitoring the southern front in both Lebanon and Syria, suggests that Israel, which is already supporting the armed opposition in Syria, has recently reactivated its spy network of Syrian, Lebanese and Palestinian Druze to carry out a propaganda campaign promoting that “Israel is about to occupy the liberated parts of Quneitra to distance it from the threats of the Syrian chaos, hence helping the Druze establish their own entity extending from the Golan to Sweida.”

The Israeli actions were preceded by remarkable steps taken by a man identified as Mounzer al-Safadi, a Majdal Shams native in the occupied Golan, who is rejected by residents of his hometown for his connections with Israel.

Safadi had changed his name to Mounzi and worked for a while as an office manager for Likud Minister Ayoob Kara. He is close to Israeli Prime Minister Benjamin Netanyahu and has already worked as a mediator between Israel and Syrian opposition figures.

In April 2012, Safadi visited Europe and informed wealthy Druze figures from Lebanon and Syria that Israel was planning to occupy Quneitra and the Druze should be ready to receive Israeli support to form their own autonomous region. Later in 2012, the Bulgarian and Israeli press published some information about Safadi’s visits to Sofia, the Bulgarian capital.

Israeli newspaper Haaretz reported that Safadi’s movements angered Israeli Ambassador to Bulgaria Shaul Kamisa-Raz, and that the latter even sent a cable to the Foreign Affairs Ministry complaining about Safadi’s activities.

Information also suggested that a Druze man from occupied Palestine managed to enter Lebanon in the summer of 2012 and introduced himself as Abu Youssef. He tried to convince several sheikhs of the Israeli scheme, but it fell on deaf ears.

Sources close to the Syrian authorities and Hezbollah did not deny that Israel seeks to further spread fragmentation in the region, even “after the Kurdish state and the caliphate, which are supported by both Turkey and Israel.”

The sources, however, warned that “this does not mean that partition became a fact in Syria, because the state is still strong and the resistance axis will fight partition with all its strength.”

“The conditions that once helped Israel to occupy southern Syria and Lebanon are now gone, and no Druze believes that there is a horizon for a viable Druze state on the demographic and economic levels,” the sources explained.

They stressed that “what Israel really wants is to create more seditions and transform the Druze community into its own guards, while it seeks to anticipate the Druze’s enrollment into new resistance factions that have started to appear on the Syrian scene.”

Partition is the ultimate evil

In this time of continuous changes, it is difficult to anticipate the future of the region. However, categorically rejecting a partition and refusing to hold any sort of discussions about establishing an independent Druze entity seems overwhelming, at least in public.

This stance is not restricted to prominent Druze figures and sheikhs in Syria or to Druze politicians and religious figures affiliated to March 8 camp in Lebanon, rather, it is shared by a large segment of Lebanon’s sheikhs, including those close to MP Walid Jumblat.

In a position consistent with that taken by the Ajaweed (Syria’s Druze sheikhs), Lebanese sheikhs considered the partition of the Levant as “the ultimate evil.”

Speaking to Al-Akhbar, the Sheikh Akl (spiritual leader) of Syria’s Druze community, Hammoud al-Hannawi said, “the Druze will stand against any partition scheme in the region because our existence depends on the existence of a Syrian Arab state.”

For his part, Sheikh Youssef Jarbouh said, “the only guaranty for the Druze is their national state and Sweida is a part of Syrian society.”

Today, these stances are echoed in Chouf, Aley, Upper Metn, Hasbaya and Rachaya.

From the Syrian town of Arna at the versant of Mount Hermon, Sheikh Suleiman Abu Nabih Kabboul declared that “the sect, everywhere, stands against partition.” His remarks were echoed by the sheikhs of Khalwat al-Baida (a major religious sanctuary for the Druze in Lebanon).

In an interview with Al-Akhbar, chief sheikh at Khalwat al-Baida, Sheikh Gahleb Qais said, “partition is destructive for the whole region, and the only option in front of the Druze is a state inclusive of all the segments of the people.”

Sheikh Suleiman Shoujaa pointed out that Druze “are a sect seeking unity,” while Sheikh Fandi Shoujaa stressed that “for us, any partition is unacceptable, we are monotheists and unifiers, Arabism is the unifying link outside sectarian divisions.”

The Druze in Aley also opposed partition with Sheikh Amin Sayegh’s visitors quoting him as saying “the Druze’s loyalty is to the national central state, not to religious statelets,” adding that “the Druze are not greedy and our religion does not seek expansion,” a position also shared with Sheikh Abu Suleiman Hassib al-Sayegh.

Sheikh Akl Nasreddin Gharib warned in an interview with Al-Akhbar that “partition would bring destruction and the Druze cannot approve schemes that seek to ruin the region.”

Even the president of al-Irfan Foundation, Sheikh Ali Zeineddin, whom many accuse of secretly encouraging partition, told Al-Akhbar that “the Druze have no interest in partition, but on the contrary, partition may bring the sect to its end.”

Seventy-five kilometers between the caliphate and Sweida

People of the Druze Mountain consider the Islamic State in Iraq and Syria (ISIS) and the Islamic State as “an existential threat against all the components of the Syrian and Iraqi peoples, as they have been dealing barbarically with those who oppose them, whether Sunnis or from minorities,” informed sources in the religious institution said. Unfortunately for Sweida residents, the caliphate’s militants are now headquartered just 75 km away from their district after taking over the Iraqi-Syrian-Jordanian border triangle. They are only separated from the eastern villages by the Asfar region in Syria’s Badia area, which is used to smuggle weapons and fighters toward Ghouta in the Damascus countryside.

Other sources within the religious institution have linked the unfolding events with “campaigns to buy lands in Badia funded by Saudi, Qatari and Jordanian organizations.” Besides, according to some sources “the Badia is floating on a sea of water, making it a certain ISIS target in the future.”
Sources on the ground have, however, reassured that “the ISIS does not currently pose a threat on Sweida, but the Syrian army, the Syrian Social Nationalist Party and armed committees in the district now consider the eastern villages a top priority after the recent events.”

Assassination of a Druze commander of the Syrian resistance

On Tuesday June 17, Sheikh Mouwafak Badrieh, also known as Abu Anad, a native of Hadr village in Mount Hermon, was killed in car bomb near Makroussa on al-Salam highway which links Quneitra to Damascus.

According to security sources, “initial information suggests that the blast was due to an explosive device planted in the car of martyr Badrieh by Mossad agents in the region, because of his role in the resistance against the Israeli enemy.”

Speaking to Al-Akhbar, local sources in Mount Hermon linked Badrieh’s assassination to “the launch of several rockets targeting the Israeli Mont Hermon observation post last March” even though Israel had already held the Syrian army and Hezbollah responsible for the attack.

While Syrian army and Hezbollah sources maintain silence about the recent resistance operations in Mount Hermon, local sources told Al-Akhbar “martyr Badrieh was part of a military formation deployed in Quneitra with a mission to damage Israeli interests in the Syrian occupied Golan.”