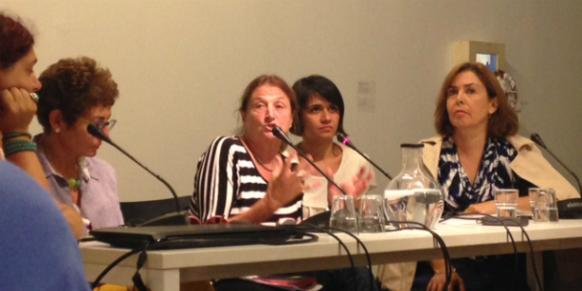 Intellectuals from around the world came together for three panel discussions held as part of an event titled “Mobilizing Memory for Action,” to address the history of conflict in relations between Turkish and Kurdish groups on Wednesday at the DEPO culture and debate center in İstanbul.

The event was sponsored by Columbia University’s Columbia Global Centers Turkey branch with public roundtables that included an array of scholars from various fields: anthropology, photography, documentary, gender studies and more. Participants addressed a plethora of topics with one over-arching theme: Re-examining history through a different lens.

Out of the 14 contributors, who presented very different topics based on several demographics, five of the scholars focused, to varying degrees, on the Kurdish issue, making Kurds the most outlined ethnic demographic during the conference.

Ph.D. candidate at Boğaziçi University’s Atatürk Institute, Özlem Kaya presented research from her “Unspoken Truth: Enforced Disappearances” and “Holding up the Photograph Experiences of the Women Whose Husbands were Forcibly Disappeared” reports. Her material displayed the struggles of the ethno-political Kurdish issue, which began in 1984 and still holds a heavy position in Turkish politics and culture. One element Kaya focused on was the way Kurdish women’s lives were changed by the disappearance of their husbands and how they had to take on different gender roles, like heavy labor duties of fixing the roof of their homes, for example.

A famed American photographer also presented her research that was developed into a controversial book, “Kurdistan: In the Shadow of History.” The material presented was gathered during her time in Kurdish refugee camps during the Gulf War. She noted, “Many of the images you saw then, of Kurds fleeing Iraq coming across the border to Turkey, are parallel to the images we see today.”

One group that was mentioned consistently throughout the presentations were the Saturday Mothers, who have been gathering outside the gates of Galatasaray High School, a common protest site in İstanbul, since 1995 and silently hold pictures of their loved ones that disappeared in the Turkish-Kurdish conflict. Meltem Ahıska of Boğaziçi University focused her material on the group in her presentation “Counter-movement, space, and politics: How the Saturday Mothers of Turkey make the enforced disappearances visible.” Ahıska explained: “Most Saturday Mothers were forced to migrate to İstanbul in the early ’90s. Most were not politically active or had any experience in politics. While women’s memory is usually related to domestic space, these women had to leave their home and mobilize their memories against the pernicious storm of state violence.”